All the latest news on the Prosecco DOC Consortium

"Canova had the courage not to copy the Greeks and to invent a beauty as the Greeks had done" (1816).
"... you have created one hundred statues, thirty of which are masterpieces!” - Stendhal

The short film GENIUS MOVES THE WORLD is a tribute to the art of Antonio Canova and to his love for dance that creates lightness and moves the world.

A journey with 3 protagonists: a cellarman, Antonio Canova and the sculpture.

Here's the story in brief: A cellarman from Treviso moves between the fermentation tanks in a Prosecco DOC cellar. He has with him a book of sculptures by Canova, and he leafs through it contemplating Hebe and other sculptures, as his mind wanders.

There, in that moment, he sees a block of marble, resembling a meteorite illuminated by a light from above. Stunned in amazement, he approaches, looking around.

The marble is infused with the energy of Antonio Canova who has chosen to celebrate the bicentennial of his death with an unusual gift. We know how artists are.

The moment the cellarman touches the marble...we are transported to the late eighteenth century: Antonio Canova moves in search of inspiration, every artist has to deal with hesitations, regrets, inspirations and electric shocks of inspiration.

Idea and matter. A kind of short circuit.

The hand that touches the marble is the same that carves it, the hand can prune and the hand can sculpt. It is subtracting the superfluous and arriving at the essence. This is how Prosecco was born. There is a lot of work in the vineyard before seeing the bubbles sparkle.

Leaving the present we find ourselves in the time of Canova. It is a journey of vision because image is memory, memory is spirit and the spirit travels through time. In the laboratory marble leaps, moves, the material dances, Canova is sculpting Hebe, daughter of Zeus and Hera, cup-bearer of Olympus.

The sculptor and the sculpture.
The sculpture is not inert matter, it can live. Canova is obsessed by this idea. After all, the artist gives form to the movement of life and wants us to have it.

The living sculpture stands in front of him. She slowly comes to life from cold loneliness and discovers herself through her senses.

A glass of Prosecco DOC Rosé has the power to awaken her.

In the beginning, life animates the sculpture in a slow and passionate awakening. It is the aroma that first moves her within, that produces euphoria in her. Ebe is alive and celebrates life by dancing.

She dances in the garden and in the villa: A residence of extraordinary beauty, Villa Molin in Padua, the ancient and neoclassical background in which Canova looks at her in amazement, stretches out his hands as if to touch a dream.

The statue has come out of itself and is produced in a dance. A dance as beautiful and bright as a sunny day. The same dance that takes place in a glass of Prosecco, producing emotions and images. The wine that dances in the glass brings us back to the cellar.

The block of marble is still there, the cellarman looking at it in amazement. He decides to see what's inside. The marble box reveals a bottle of Prosecco, a light illuminates its contents while the cellar hand receives as a gift what he himself created.

He realized that seeing the enormous wealth of art in everyday life is not outside of us, but means making life more splendid and more beautiful every day.

A good glass of Prosecco DOC is an authentic aesthetic experience.

Hebe is a sculpture again
Canova goes back to sculpting
The cellarman continues his work.

All the immages in the world are here and now.

In the genius that moves the world.

Virna Toppi, prima ballerina at the Teatro Alla Scala was chosen to embody the statue. Michele Piccolo is Antonio Canova while Andrea Offedi is the modern cellarman.

On the occasion of the Bicentennial of Antonio Canova's death (1822-2022), director Carlo Guttadauro together with his ANAM CARA Philosophy of Image team have created a film freely inspired by the GENIUS who moves the world. 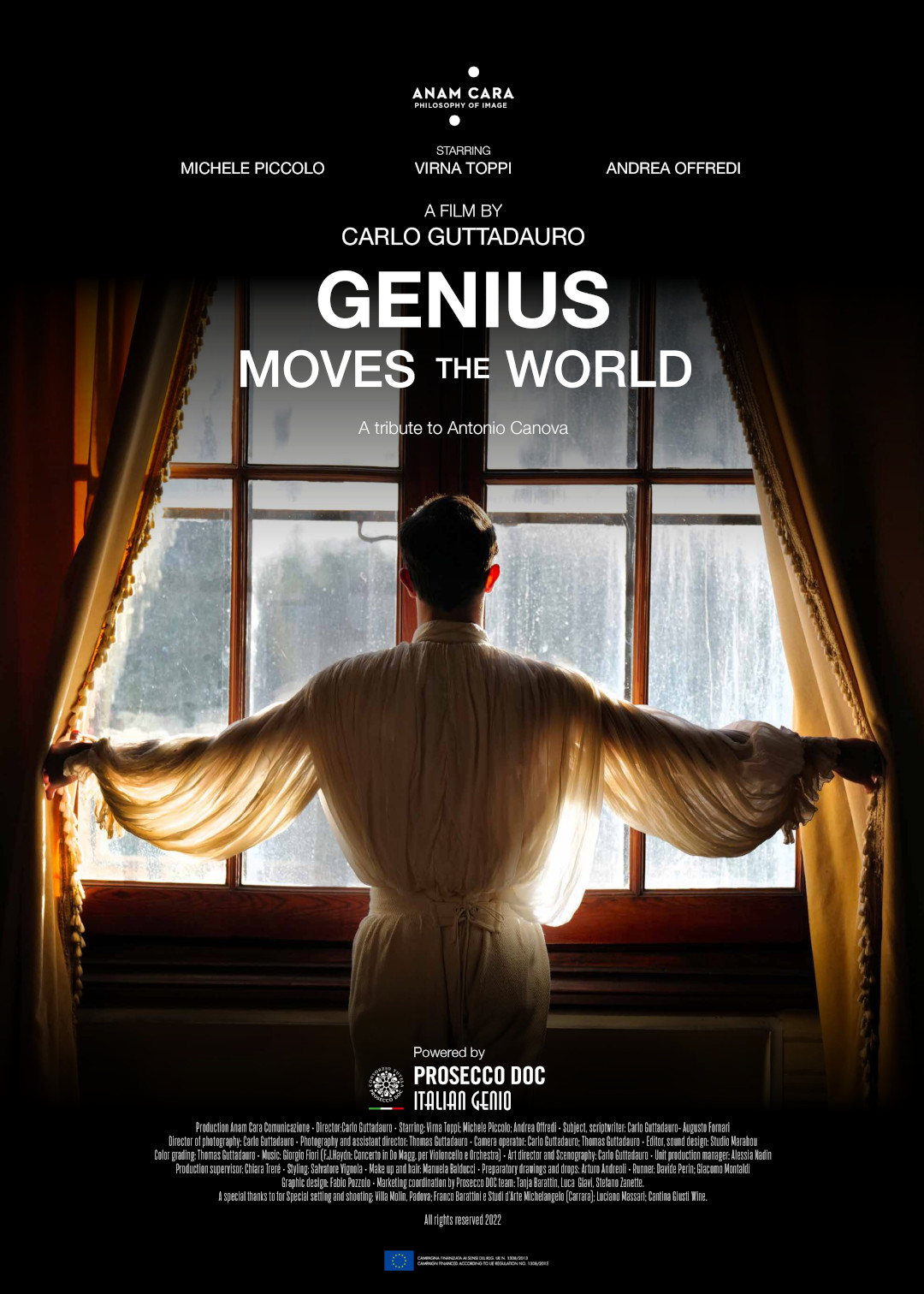 Gorizia and its medieval castle

You must be of legal drinking age to access this website and declare that you are familiar with the laws of your country regarding the consumption of alcoholic beverages..

I declare that I am aware of regulations and laws imposed by my country in the consumption of alcoholic beverages..